Rule of law in Poland 2020: The rule of law crisis in the time of the COVID-19 pandemic 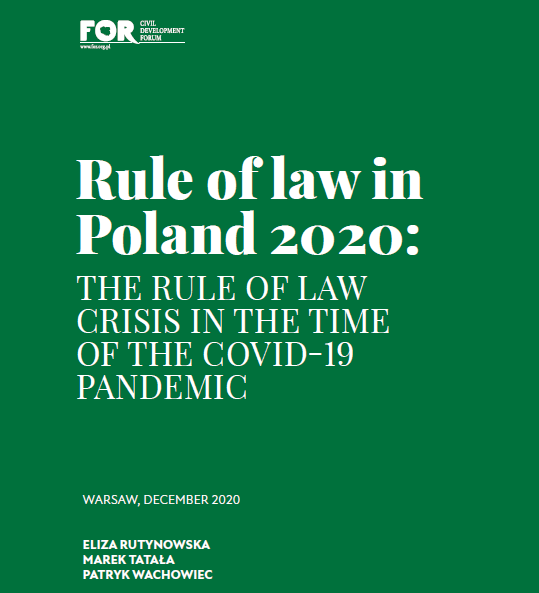 The COVID-19 pandemic has led to serious health and economic emergencies all over the world. Moreover, it has also affected democratic institutions and the rule of law. On the one hand, the pandemic has been exploited by local strongmen and authoritarians in many places to consolidate their power and justify human rights’ violations. On the other, it has been a test for the resilience of democracy, and there are even some hopes for an upcoming democratic recovery.

These consolidation and abuses of power have been also visible in Poland, where the rule of law has been under attack for almost five years. After taking control of the Constitutional Tribunal and the National Council of Judiciary, the Law and Justice party has managed to include the Supreme Court on the list of judicial institutions controlled by the ruling party’s nominees. The pandemic has been also connected with a rapid and large-scale production of new laws, which together with a weakening of transparency have contributed to growing legal chaos in times of huge uncertainty. At the same time, the government has continued to use the captured CT to push through their political agenda in many spheres, and to weaken constraints on its powers.

While extraordinary times such as pandemics usually require emergency measures, Law and Justice decided not to use the emergency laws described in the Constitution. Instead, it introduced numerous restrictions to civil rights and liberties without a proper legal basis. Many of its pandemic-related policies were justified from a medical point of view but their legality was questionable, including some court rulings which favoured people who had been punished and affected by the illegal restrictions. Similar rulings are expected in 2021, and these failures of the government in law-making will do a great deal of harm to the legal system in Poland.

The main reason for avoiding emergency laws was the ruling party’s decision to proceed with the presidential elections during the pandemic. According to the Constitution, elections cannot take place during a state of emergency and for up to 90 days after its termination. The elections finally took place at the end of June, seven weeks after they were originally scheduled, and the whole election period was full of controversies related to illegal changes in the electoral law and the push for universal postal voting. The second term for Andrzej Duda, the candidate of Law and Justice who won re-election, signals a future of more illiberal policies, violations of the rule of law and attacks on many individual liberties, similar to what Poland has witnessed since late 2015.

The goal of this report is to analyse the key developments related to the rule of law and the legal system in Poland during the COVID-19 pandemic. We discuss the legal context related to the emergency laws from the point of view of the Constitution (Part 2), and explain why they were not used, while describing the preparations for the presidential elections (Part 3). Moreover, we analyse examples of the restrictions to civil rights and liberties which were introduced without a proper legal basis, and show how the Supreme Court was captured by the ruling party during the pandemic and the Constitutional Tribunal was abused to strengthen Law and Justice and its political agenda (Part 4). This is the third instalment in a series of four reports by the Civil Development Forum (FOR) on the crisis of the rule of law in Poland. In the first part we analysed the current state of the rule of law from domestic and comparative perspectives. We explained the reasons behind Law and Justice’s key policies regarding the justice system and described the main changes in the courts and prosecution service since 2015. Moreover, we examined the impact of deterioration of the rule of law in Poland on key indices regarding the rule of law and the quality of democratic institutions.

In the second instalment, FOR analysed the responses of the European Union and other international bodies to the rule of law crisis in Poland. We compared the reactions from various EU institutions and showed what can be done better at the European level in the future.

This and other reports as well as the Rule of Law in Poland project are based on our belief that the rule of law in Poland and other EU member states is important not only for the citizens of these countries, but also for the future of the European project as a club of countries with high-quality democratic institutions safeguarding human rights.

Full report “Rule of law in Poland 2020: The rule of law crisis in the time of the COVID-19 pandemic” (by Eliza Rutynowska, Patryk Wachowiec and Marek Tatala) available below.

Rule of law in Poland 2020: The rule of law crisis in the time of the COVID-19 pandemic
ABOUT US
PROJECTS
PUBLICATIONS
SUPPORT US