Rule of Law in Poland 2020: How to contain the Crisis and reform the Justice System? 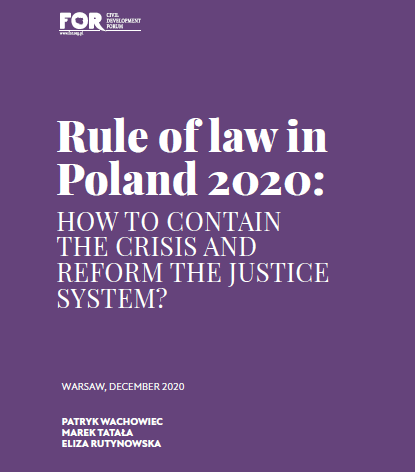 The crisis in the rule of law that Poland has witnessed since 2015 must be contained as soon as possible. Any proposal to restore the rule of law must follow certain principles such as legality, proportionality and respect for fundamental rights. It is also important to gather public support around such a plan, and make sure that it does not simply assume a return to status quo ante.

It is essential to correctly identify the breaches of the rule of law in order for any successful plan to contain the crisis. In order to focus on genuine violations, we propose our own definition, and catalogue the breaches.

Some civil society organisations and elements of the opposition have already presented their plans to restore the rule of law. It is important that such documents are created and debated as it will allow us to build better, definitive plans when the window of opportunity opens. However, despite having correctly identified the key breaches, their plans sometimes lack clarity, and need to be updated in order to respond to the recent developments; or they require improvements to respect the right to court of those affected by these plans, including the individuals appointed to judicial posts following questionable nominating procedures.

As the Constitutional Tribunal has the power to issue universally binding decisions which usually follow the ruling majority’s views, it is important that any plans to contain the crisis deal with this issue first.

All these breaches, because of the Constitutional Tribunal, should be referred to international courts, such as the Court of Justice or the European Court of Human Rights. In some fields, cases which relate to the violations of the rule of law are already pending. The judgements of international courts may thus facilitate the whole process of restoring the rule of law in Poland.

While the ruling party’s policies have led to many violations of the rule of law, they have also failed to respond to various challenges that existed in the justice system before 2015.

Apart from restoring the rule of law, the justice system has to be reformed. National and international measures show that performance of judiciary has been deteriorating since the ‘reforms’ by Law and Justice started. For example, the average length of judicial proceedings is even greater, and the substantial public resources that have been devoted to the justice system are still being spent in an inefficient way.

This report concludes the series about the rule of law crisis in Poland published by the Civil Development Forum (FOR) in 2020. In the first part we presented the detrimental changes in the justice system pursued by the ruling majority since late 2015 from a domestic and comparative perspective. Part 2 was devoted to international and European responses to the on-going crisis. In Part 3 we described how the COVID-19 pandemic negatively affected the situation and posed new risks to the rule of law.

This and other reports, as well as the Rule of Law in Poland project, are based on our belief that the rule of law in Poland and other EU member states is important not only for the citizens of these countries, but also for the future of the European project as a club of countries with high-quality democratic institutions safeguarding human rights.

Full report “Rule of law in Poland 2020: The rule of law crisis in the time of the COVID-19 pandemic” (by Patryk Wachowiec, Marek Tatala and Eliza Rutynowska,) available below.

Rule of Law in Poland 2020: How to contain the Crisis and reform the Justice System?
ABOUT US
PROJECTS
PUBLICATIONS
SUPPORT US