Rule of Law in Poland 2020: A Diagnosis of the Deterioration of the Rule of Law From a Comparative Perspective 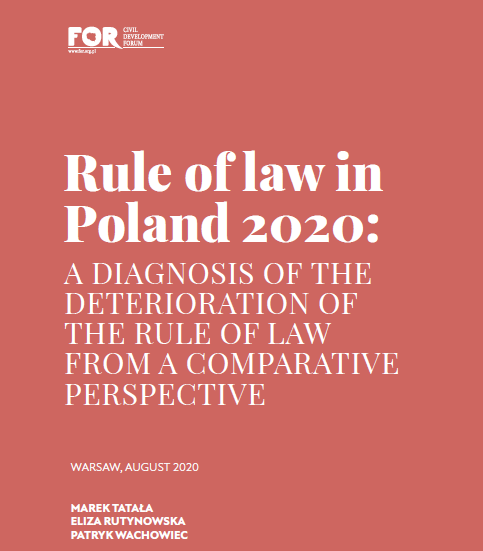 A new report “Rule of Law in Poland 2020: A Diagnosis of the Deterioration of the Rule of Law From a Comparative Perspective” published by the Civil Development Forum (FOR) summarizes the state of the rule of law in Poland after five years of the Law and Justice (PiS) party in power and analyses the current situation from a comparative perspective of the EU countries.

The topic of the rule of law in the European Union frequently arises in public debate, usually as a result of developments in two member states: Hungary and Poland. It is therefore no surprise that the governments of these two countries have for years been fierce opponents of linking the EU budget with the rule of law. The conditionality of EU funds was one of the issues negotiated during the five-day EU summit which ended on 21 July 2020. On the one hand Charles Michel, president of the European Council, declared that “for the first time in the EU’s history, respect for the rule of law will be a decisive criterion for budget spending”. On the other hand Poland’s prime minister, Mateusz Morawiecki, announced that “there is no direct link in the agreement between the rule of law and budgetary resources”.

While some connection with European values, including the rule of law, is part of the summit’s agreement, it seems that the principle of conditionality has been watered down. Nevertheless, it is still too early to assess the strength of this new instrument, and we should wait for decisions taken by other EU institutions on the matter.

The result of the 2020 presidential elections in Poland, which were won by Andrzej Duda, the candidate of the ruling Law and Justice (PiS) party, is also important for the future of the rule of law. During his first term President Duda supported the majority of the policies labelled as ‘reforms to the justice system‘. Therefore, his re-election means that we should expect more of such ‘reforms‘ in the future. Another wave of changes in the structure of the common courts, which could lead to the de facto verification of all judges by politicians, has already been announced by some members of the ruling majority. This means that we will observe a further deterioration of the rule of law in Poland. The anticipated ‘reforms‘ will generate clashes domestically and at the EU level. Therefore, to see where Poland is today and what might be expected in the future, it is important to analyse the current state of the rule of law from domestic and comparative perspectives, which is the main aim of this report.

To better understand the legal context in which these ‘reforms of the justice system‘ have been taking place, we will briefly discuss the key institutions of the Polish legal system in Section 2. For those who are familiar with the legal structure in Poland, we recommend moving to Section 3, in which we explain the reasons behind the key Law and Justice policies regarding the justice system. In Section 4 we analyse the main changes in the courts and prosecution service since 2015. Finally in Section 5, we describe the deterioration in the rule of law in Poland from a comparative perspective.

The rule of law in Poland and other member states is important not only for the citizens of these countries, but also for the future of the European project as a club of countries with high-quality democratic institutions safeguarding human rights.

Rule of Law in Poland 2020: A Diagnosis of the Deterioration of the Rule of Law From a Comparative Perspective
ABOUT US
PROJECTS
PUBLICATIONS
SUPPORT US