FOR Press Conference: Analysis of economic reforms in Hungary and Poland 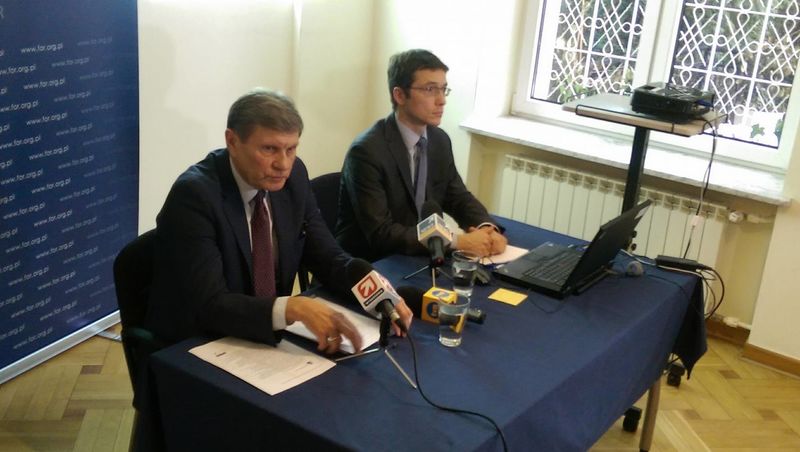 On 21 December 2016, FOR (the Civic Development Forum) held a press conference at its headquarters with the participation of Professor Leszek Balcerowicz and Dr. Wiktor Wojciechowski, the Chief Economist of Bank Plus, Expert at FOR.

The theme of the conference: PiS duplicates bad decision of Fidesz, which harm the long-term growth of the economy. Analysis of economic reforms in Hungary and Poland.

Watch the video recording of the conference

Analysis 22/2016: Orbanomics or unfulfilled dream of the Hungarian economic power

After winning the 2010 elections, Prime Minister V. Orban questioned the existing socio-economic model of Hungary, where the central place was given to the democratic system of political power and the free market economy with the dominant role of private property. In 2014 he stated explicitly that for Hungary exemplary models to follow are Russia, Turkey, and China, that is authoritarian countries with a high proportion of enterprises controlled by the central government.

Many actions implemented by V. Orban's government are, in the light of international experience, detrimental to the long-term growth of the economy. These include, above all, the imposition of new taxes on selected sectors of the economy, mainly those dominated by companies with foreign capital; the increase of state ownership in enterprises; the dismantlement of the funded pension system, restriction on market competition and reduction of predictability and enforcement of law. Since the beginning, these changes have been motivated by the belief of Fidesz leadership that a strong state authority that monitors selected sectors of the economy (e.g. banking, energy) and favors chosen domestic enterprises, preferably those most sympathetic to the ruling camp, promotes the rapid growth of the economy. The sole source of this belief was their ideology. Results of numerous studies and experiences of other countries show that countries with a dominant private sector, with transparent and steady conditions for the development of a competitive market for all operators irrespective of the country of origin of their owners and with stable and predictable legal rules, develop on average faster than countries were these principles are limited. Under V. Orban, Hungary recorded an alarming decline in quality assessment of institutions affecting the competitiveness of the economy, such as the protection of property rights, the scope of competition on the domestic market, the independence of the judiciary, or government favoritism in the economy.

Beside many harmful economic decisions, the government of V. Orban took care to maintain a limited public finance deficit, and in result to gradually decrease the amount of public debt in relation to GDP. The achieved reduction of the deficit, however, would not be possible without the reforms introduced by his predecessor, i.e. the government of G. Bajnai. Despite harsh criticism of his predecessor, after winning elections V. Orban upheld and continued his most important reforms (for example increase of the retirement age for both sexes to 65 years, the elimination of thirteenth pension and thirteenth salary in the public sector). Moreover, although the economic policy of Fidesz is often described as unconventional, mainly due to the introduction of new sector taxes, it is in many ways no different from standard recommendations on economic policy formulated by international institutions.

As an example may serve lowering direct taxes (PIT and CIT), offset by higher revenue from taxes on consumption (VAT). Although major changes in the structure of tax revenue in Hungary have been implemented by the government G. Bajnai (increase of the VAT rate from 20% to 25% and reduction of non-wage labor costs from 43.9% to 36.7% for families with children, receiving average salaries), nonetheless, Fidesz continued this direction of reform. In 2011 the VAT rate was raised from 25% to 27%
At the same time, the tax wedge for families with children was reduced from 36.7% to 33.0%. This decrease in non-wage labor costs was the result of the introduction in 2011 of tax-free amount dependent on the number of children. As a result, the tax benefit produced by the first and second child increased in Hungary by approx. 140 zł per month, and tax savings from the third and subsequent children by approx. 470 zł per month. Pro-family policy in Hungary reinforces the incentives for legal work because only officially earned income allows to take advantage of the preferential tax-free amount. Unlike in Hungary, pro-family benefits paid in Poland under the program 500+ weaken incentives to work.

In 2010-2015, Hungary's public debt fell from 80.0% to 75.8% of GDP, and a significant impact on this decline was made by the acquisition of private capital savings from capital pension funds in 2011. However, while Fidesz inscribed in the constitution the debt rule, which obliges the parliament to adopt budgets which reduce public debt to 50% of GDP, after winning the elections PiS dismantled expenditure rule that would limit spending in good economic times.

Despite the above-mentioned favorable changes in the structure of tax revenues and despite taking care of fiscal discipline in Hungary, in 2016 - that is after more than six years in power - there is no reason to believe that the government's economic policies of V. Orban are a success.

Firstly, since 2008 (the last year before the outbreak of the global financial crisis) until 2015 GDP in Hungary increased in real terms by only 3.2% - the lowest product growth among the countries of the Visegrad group. For comparison in Poland in the same period, GDP grew in real terms by 23.7%, in Slovakia 12.2%, and in the Czech Republic by 5.3%. Admittedly in the years 2013-2015 the Hungarian economy grew at an average rate of 3.0% per year, but the major impact on this recovery had public investments co-financed from EU funds. During this period, public sector investment grew at a rate of approx. 25% per annum and their value in 2015 was more than twice higher than in 2008. With the completion of the EU projects in 2016, the growth rate of total investment in Hungary strongly slowed down: in the quarters Q1-Q3 of 2016 the gross fixed capital formation fell by an average of 12%.

Thirdly, although Hungary under V. Orban recorded a strong improvement in the labor market (employment rate increased from 60% to 69% among people aged 20-64 years), it was mainly due to lower non-wage labor costs introduced by the government of G. Bajnai, as well as strong growth of employment in public works, which are very inefficient way to permanently increase chances of employment. Counting subsidized employment, in 2015 employment rate in Hungary for persons aged 20-64 years would be 65.6%, that is more than 3 percentage points lower than official statistics.

The disappointingly low rate of growth of the Hungarian economy after V. Orban came to power, in particular the deep collapse in private sector investments, and only short-term economic recovery in the years 2013-2015 driven by EU funds, should be a strong warning signal for PiS to avoid the mistakes made by Fidesz. Unfortunately, up to now PiS government has been replicating harmful decisions of Fidesz (e.g. it increases supervision of politicians over enterprises, weakens the quality of institutions that are the key to the stability of the business environment and, consequently, to investment growth), while not repeating solutions that are beneficial for the growth of the economy (e. g. the extension of the retirement age).

You can download full analysis by FOR from bellow.

Read the analysis in polish.

Analysis 22/2016: Orbanomics or unfulfilled dream of the Hungarian economic power
ABOUT US
PROJECTS
PUBLICATIONS
PRESS OFFICE
SUPPORT US