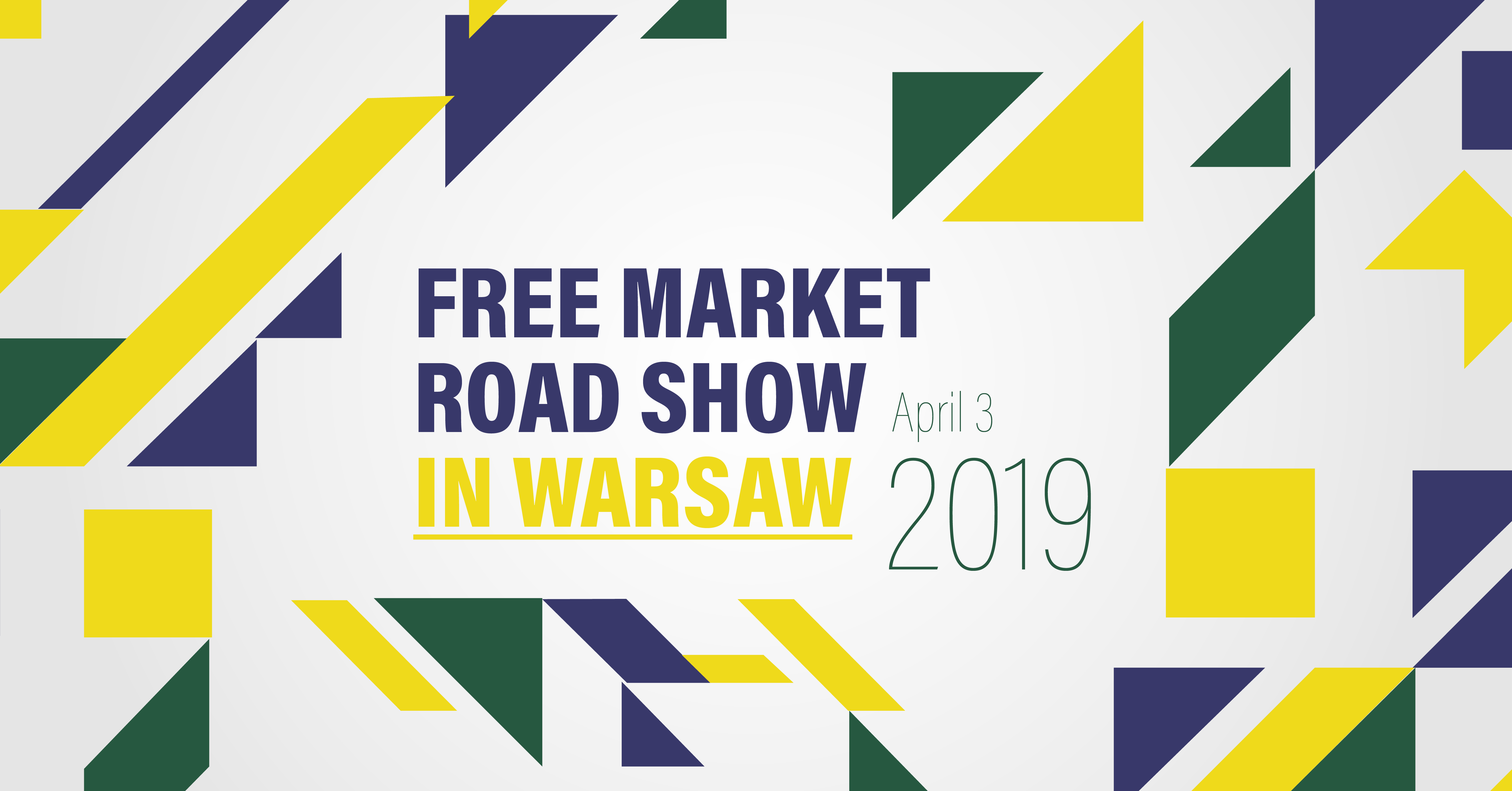 The Austrian Economics Center (AEC), in cooperation with over 100 leading think-tanks and universities across Europe and the Caucasus, and in association with international partners are proud to present the 12th Annual Free Market Road Show, which tours 40 capitals during April and May in Europe and the Caucasus. Civil Development Forum (FOR) is again the local organizer of the FMRS conference in Warsaw.

After-conference report can be found below.

Theme: Freedom in Europe in the run-up to the European elections

The event will be held in English

The participation is free of charge and the prior registration is obligatory. You can register via this link: freemarket-rs.com/event/fmrs-warsaw/

Join the event on Facebook and invite your friends!

• Ivan Miklos (Slovak politician and the former Minister of Finance of Slovakia)
• Richard Zundritsch (Board member of the Austrian Economics Center and the Hayek Institut)
• Marcin Nowacki (Vice President of Union of Entrepreneurs and Employers – ZPP)
• Karol Zdybel (Associate in Mises Institute of Economic Education, economist and management consultant)

17:50 – 19:00 Panel 2. Illiberal movements in Europe and elsewhere: threat to freedom?
Description: What drives enemies of freedom, free markets and rule of law? Are enemies of freedom stronger nowadays? Which policies stimulate illiberal and anti-capitalist sentiments? How to defend free market economy and individual liberties as sources of human well-being?

On April 3, 2019, the Free Market Road Show visited Warsaw. This year the event took place at the University of Warsaw. The conference began with a short welcome speech by Agata Stremecka, President of Civil Development Forum (FOR).

The first panel, entitled “Liberal agenda to strengthen Europe”, was moderated by Marek Tatała, Vice-President of FOR.

Ivan Miklos, former Minister of Finance of Slovakia, was the first speaker. He noticed that “freedom, open society, and liberal democracy are under threat today”. They are threatened both from the right and from the left. He pointed to wrong policies pursued on the European Union level in the areas of migration, social policies, and quantitative easing. But despite its own problems, Miklos stressed that the EU has a great role in protecting freedom. He gave numerous examples of how the EU protected economic freedom in Slovakia, when the statist national government tried to restrict it. He recognized that the solution to the European problems are reforms strengthening freedom. What is needed is convergence in competitiveness, i.e. policies that would push less competitive countries to implement more reforms strengthening economic freedom. To do so, we need political leaders, who would appeal not only to rational arguments, but also to emotions.

Richard Zundritsch from the Austrian Economics Center and the Hayek Institute spoke next. He pointed to the overregulation as a Hayekian Road to Serfdom. He noticed that: “Inevitably, too much planning, too much central organization leads to unfree, dictatorial circumstances”. He referred to the socialist planning in Central and Eastern Europe as a historical evidence of his thesis.

Next, Marcin Nowacki from the Union of Entrepreneurs and Employers took the floor. At the beginning, he noticed that: “Poland, Czech Republic, and Slovakia are great examples of economies that have benefited a lot from the European four freedoms”. But he raised worries about growing protectionism in the EU market. He discussed food and transportation sectors, where more developed countries use national or EU-wide regulations to protect their companies against competitors from less developed members of the EU, including Poland and other Central and Eastern European countries.

Karol Zdybel, associated with the Mises Institute of Economic Education, agreed that so far the history of European integration is a success story. And many European nations follow suit, as is confirmed by the surveys. Zdybel tried to answer the question, why on the one hand, the people are content with the EU, but on the other hand, the anti-EU movements are on the rise. He claimed that some objections against the EU are justified from a classical liberal perspective. He pointed, for example, to problems with a lack of transparency of EU bureaucracy. According to Zdybel, this is the reason why some people lose their sense of connection with the EU institutions.

After the first panel the keynote speaker, Leszek Balcerowicz, Board Chairman at FOR, took the floor. The topic of his lecture was “Globalization and Its Critics”. At first, he noticed that: “Every social process can be analyzed from three perspectives: economic, political, and moral”. But he warned that the moral perspective “should not be confused with cheap moralizing”. He stressed that it is bad to focus on the losers and not to mention the winners of globalization. And it is the perspective of nationalistic ethics, which does not care about people in other countries. Balcerowicz emphasized the mutual benefits of free trade. While speaking about the financial globalization he concluded that there is a growing body of evidence that there is a certain set of bad policies behind every financial crisis.

The second panel, entitled “Illiberal movements in Europe and elsewhere: a threat to freedom?”, was moderated by Agata Stremecka, President at FOR.

The first question was about populism and its connection with: Donald Trump, Brexit, Victor Orbán, and the situation in Poland.

The first speaker, Dan Mitchell from the Center for Freedom and Prosperity, claimed that comparing the populism practiced by Trump and Kaczyński is incorrect. He stated that the politics of Donald Trumpa and Brexit are a different kind of populism than what is happening today in the rest of Europe. During the U.S. elections, citizens voted for the lesser evil, as was the case with Brexit. He also emphasized that the major challenge of demographics and unsustainable welfare state policies are in the Western world.

Edit Zgut, lecturer at the Centre for Europe, University of Warsaw, pointed out that centralization of power stimulates the spread of populism. For example, in Hungary almost all the media are under the control of the ruling party and present government propaganda, while the activities of civil organizations are very limited. This makes the situation even worse because people tend to change their attitude towards illiberal politicians very quickly.

The third speaker, Cris Lingle from the Universidad Francisco Marroquín in Guatemala, mentioned that the issue of populism is a real problem. He said: “It will be hard to maintain democracy”. He added that the new legislation is mainly about taking from one and giving to another. Now, in many countries the redistribution game is taking place, politicians have more power and individuals less freedom.

Leszek Jażdżewski, Editor-in-Chief of Liberté!, noticed that people in Poland used to believe that democracy will last forever and that it would defeat all other systems. However, thinking that democracy is resistant and sustainable will always be wrong. We have to realize that democratic states are getting weaker.

The second question was: What drives enemies of freedom and of rule of law?

Mitchell said that he is worried about some cultural changes including growing acceptance for the concentration and power and emphasized the importance of the separation of powers, which is stronger in the US than in Europe. He also said that he appreciates that the EU requires its members to prove that they are following the rule of law. Zgut reminded the audience that “democracy is not dying in the dark, democracy is dying before our very eyes.” In Hungary, many people think that the only possibility to accumulate wealth is corruption. As a result of political reasonsm the EU countries do not apply all the legal tools established by the EU. Lingle pointed out that legislation is a fundamental problem. Currently, theories such as the modern monetary theory claim that debt has no consequences on the national economies. Some economists encourage getting into debt, and politicians, who focus on power and money, follow their instructions. Jazdewski said that people think that the antidote to bad governance is democracy, and when the government does not work well, they call for more democracy, but it is not a magical solution to solve wrongdoing in politics.

This was the 7th edition of the Free Market Road Show in Poland and another opportunity to talk in Warsaw about freedom in Europe and the world with speakers from Poland and abroad. We also hope that the conference was an inspiration for many of the FMRS participants and viewers of the live stream so they can keep working on defending and strengthening freedom in Poland and elsewhere.

Weronika Czaplewska and Marcin Zieliński, both work for the Civil Development Forum (FOR) 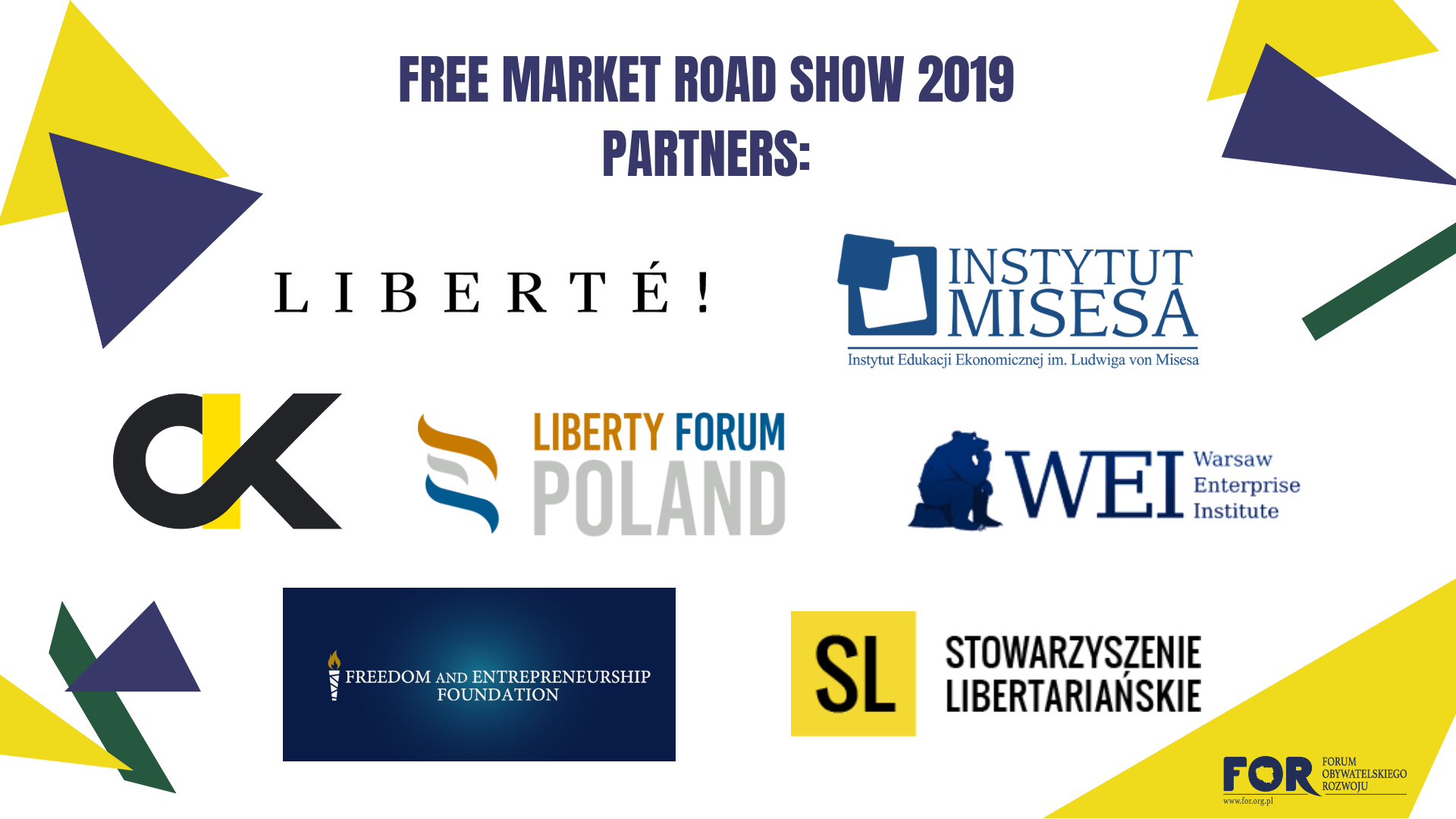