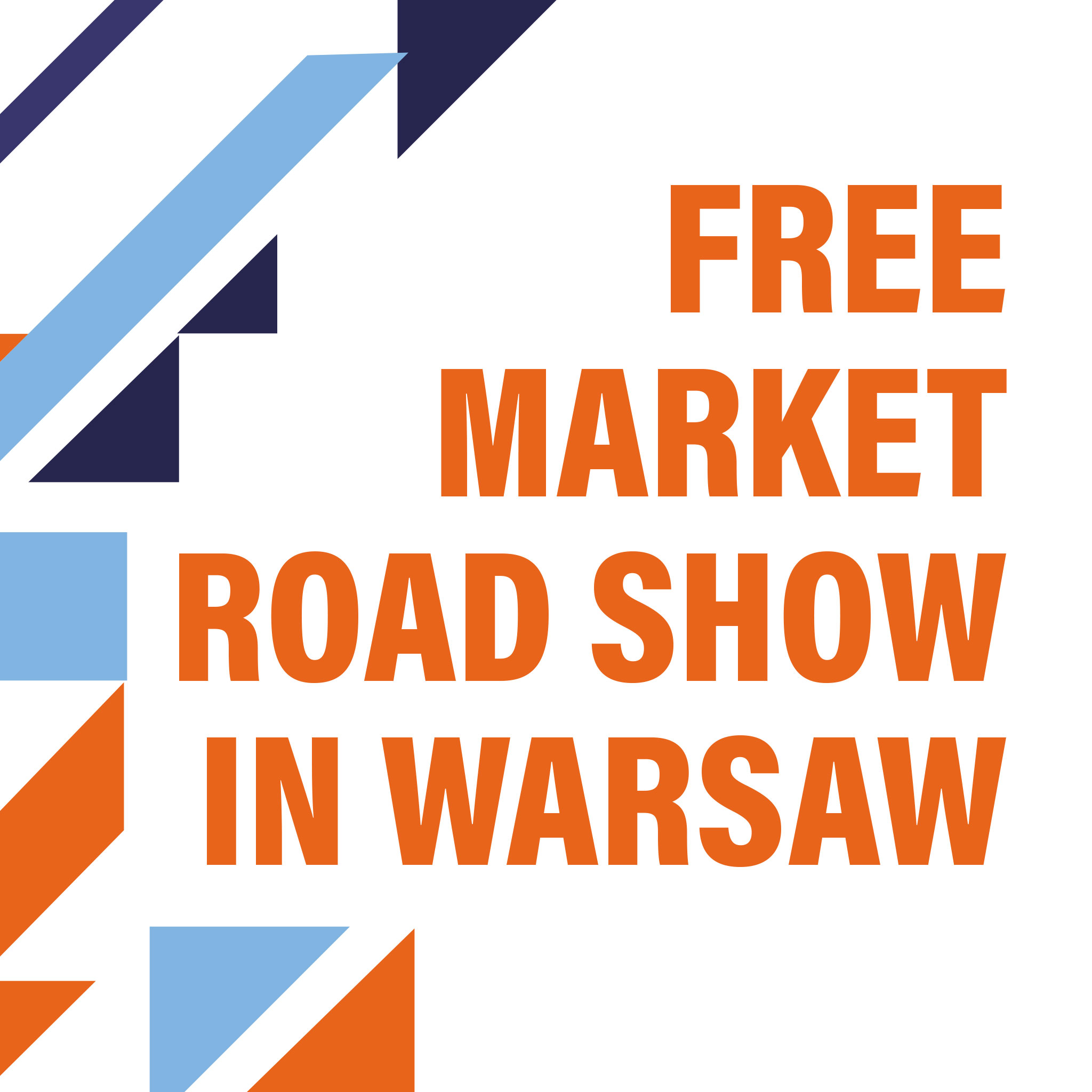 The Austrian Economics Center (AEC), in cooperation with over 100 leading think-tanks and universities across Europe and the Caucasus, and in association with international partners are proud to present the 11th Annual Free Market Road Show, which tours 40 capitals during April and May in Europe and the Caucasus. Civil Development Forum (FOR) is again the local organizer of the FMRS conference in Warsaw together with our this year’s host – SWPS University.

After-conference report can be found below.

The 2018 Free Market Road Show will bring together leading business people, outstanding scholars and students, opinion leaders, policy experts, elected officials, diplomats and other interested parties from across Europe to discuss openly core European values – a topic which has been missing in the recent political debates within Europe which have focused almost exclusively on the migration crisis. Recent political developments in Europe have seen a rise in the popularity and the parliamentary representation of political parties advocating the politics of populism, government largesse, nationalization of sectors of the economy, and the funding of unrealistically extravagant expansions of existing safety nets.

In order to engage with an even wider audience and further inspire the exchange of ideas the format of the 2018 Free Market Road Show slightly changes – including a new interactive talk format for the FMRS discussions to draw more participation from all sides of the political spectrum and a greater emphasis of the ‘millennials’ and younger people.

The event will be held in English, no translation would be provided.

The participation is free of charge and the prior registration is obligatory. You can register via this link: http://freemarket-rs.com/event/fmrs-warsaw/

Join the event on Facebook and invite your friends!

Moderator: Marek Tatała (Vice-President at the Civil Development Forum – FOR)

● Leszek Balcerowicz (Chairman of the Civil Development Forum's Board)

Moderator: Agata Stremecka (President at the Civil Development Forum – FOR)

The first panel, titled “Which values can stop the rise of populism in Europe and elsewhere?”, was moderated by Marek Tatała, the Vice-President at Civil Development Forum (FOR).

Cris Lingle, Visiting Professor of Economics at Universidad Francisco Marroquín in Guatemala, gave a presentation on the origins and transmission of values. He presented a framework for a general discussion by stressing a distinction between tribes and civil societies. Since the cost of contesting the values of the group is in the civil society much smaller, the civil society “tends to be a moderating influence over the worst possible outcomes of the tribalistic values” that could lead to the abuses of other groups.

The second speaker was Andrzej Kondratowicz, Professor at SWPS University, who spoke on the issue of using economic populism by politicians to win the elections. But although “historically speaking, economic populism always ends badly”, the expert is pessimistic about the short-term perspectives of winning against economic populism in Poland and other countries. We will have to wait, until the outcomes of bad economic policies show up fully. And only then we will be able to remove the economic populists from power. It does not change the fact, though, that we have to promote the ideas of economic freedom right now.

Marcin Matczak, Professor at University of Warsaw, presented some reflections on the sources of the current crisis of the rule of law which is also a crisis of liberalism. In his opinion the problem is that “Liberalism is not good at providing the plans for community, at telling people what to do.” This axiological vacuum is now being filled by narratives of populistic nationalists. One of the solutions presented by the expert was to fill the vacuum with Judeo-Christian values instead.

The last speaker, Richard Rahn, who is the Chairman of the Institute for Global Economic Growth, at the beginning recalled the remarkable economic progress that Poland made after the fall of communism. He emphasized that “populism is not a coherent body of thought” and that the rise of populism is the outcome of the failure of establishment.

After the Q&A session we saw the keynote speaker who was Leszek Balcerowicz, Board Chairman at FOR. Professor Balcerowicz spoke on good and bad transitions. He reminded that institutional systems are the most important issue in the social sciences. “Large differences or changes in institutional systems produce huge differences in the conditions of life, not only economic, but non-economic, too, like fear generated by government”, he emphasized. From the empirical perspective we can see that liberal democracies with free elections, extensive civil rights, rule of law and economic freedom outperform other systems. But unfortunately those good systems can be undermined from within, when bad ideas win. The essence of such bad transitions is a “deterioration in the rule of law, quality of democracy, civil rights after free elections.” And that is what we witness now in Poland.

The last part of the Free Market Road Show conference was titled “Which European values matter for our well-being?” The moderator of that panel was Agata Stremecka, President at FOR, who introduced experts and gave them voice.

John Fund, National Affairs Columnist for the National Review Online, began with recalling the historical moment in Poland in 1989. “Poland led the way in the collapse of communism and the world will never forget that. But now, there are new challenges.” Now we have to oppose the populism at the same time we try to understand why people vote for populists. According to the expert’s opinion, it is the hardest thing to do.

Populism as the biggest threat for European values and our well-being was the topic that every speaker mentioned. Michael Williams, Founder & President of the ALTIUS Financial, Inc., Founder of The Defender of Capitalism Project said “Freedom is on the wane. Populism is on the rise.” In that context the issue of values is crucial. What is more, he called attention to perceiving values by citizens. “Values in my point of view are things that I want. As libertarians we value democracy, rule of law, but I value my family, my work, my education, my life. The values that I talk about are the values of the individual.” He agreed with John Fund that the real value is an individual, not a collective. Protecting collective’s rights is not that the government should do, because that is named the populism. “The role of government in protecting rights of individual should be strong, but narrow.”

In the end of the second part of the conference Agata Stremecka mentioned that the European Union wanted to implement a new instrument to protect European values. It is called “EU values fund”.

Mikołaj Pisarski, President of Mises Institute of Economic Education, said “We would not take that money, no matter the amount, because I simply do not believe that you can truly commit to promoting this values that we believe when you are basically forced to dance at the leash.” According to his point of view, it is not possible to spend that money in an effective way, as it is connected with precise public guidelines.

“I would be very wary of any government program”, said Roberta Herzberg, Senior Fellow of F.A. Hayek Program in Advanced Study in Philosophy, Politics, and Economics. Only motivation for her to take that money would be not to let inappropriate people to use it, because some institutions want to persuade us which values are right. “There are plenty of universities or academics that are willing to tell you what your values should be.”

The 2018 Free Market Road Show has been bringing together leading business people, outstanding scholars and students, opinion leaders, policy experts, elected officials, diplomats and other interested parties from across Europe to discuss openly core European values – a topic which has been missing in the recent political debates within Europe which have focused almost exclusively on the migration crisis.