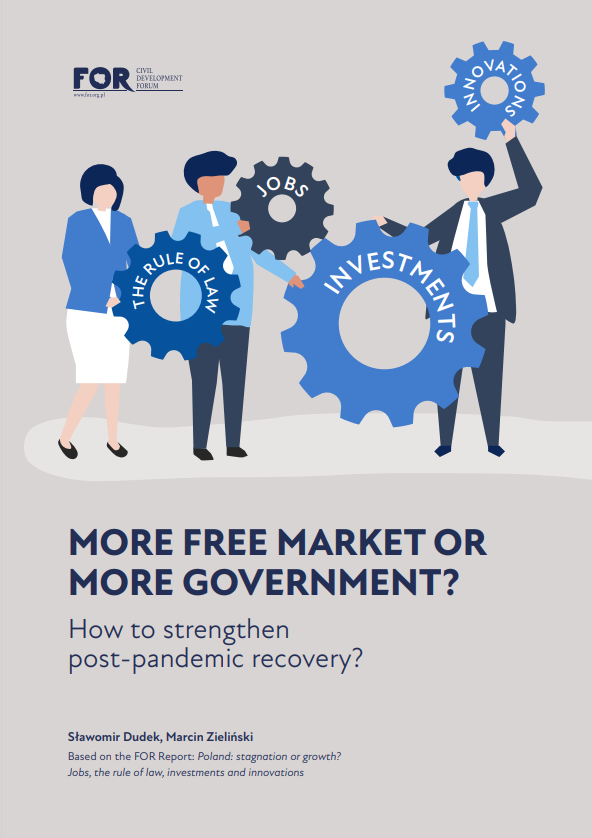 The COVID-19 pandemic was accompanied by unprecedented state interventions – from restrictions on basic individual freedoms to significant increases in public spending, among others, to compensate companies for the effects of the shutdown. In discussions of post-crisis recovery, we often hear about the need to “stimulate the economy”. This is usually understood as increasing state interventionism and further increases in public spending. In reality, however, economic development is determined by private entrepreneurship within the free market. It is the countries with greater economic freedom that grow faster in the long term. The state may provide a short-term boost to growth, but it will be at the expense of lowering the economy’s potential in the future. Therefore, we need extensive deregulation – the elimination of regulations that hinder companies, the denationalization of state-owned behemoths and the simplification of the tax system.

In January 2020, we looked with some concern at reports of a new coronavirus emerging in China. The problem, however, seemed remote and few people in Poland or the West expected what followed. By February, the situation was becoming more serious in Italy, making people in Europe aware of the dangers of a developing pandemic. The uncertainty accompanying the phenomena occurring then brought about serious plummets on stock exchanges in the last week of February, also in Poland, where the WIG index of all companies fell by over 14% (later, after a few days of calm in the first days of March, there were further plummets – by another 25%).

March brought about the first restrictions in Poland. On 12 March educational institutions and higher schools were shut down, on 13 March 2020 restrictions were introduced in shopping malls, restaurants were banned from serving food on the premises, and gyms, swimming pools, dance clubs, fitness clubs, museums, libraries and cinemas were closed. Beginning on March 24, restrictions were placed on movement except for subsistence, health and work purposes. A week later, the government closed hotels, hairdressers, beauty salons, tattoo and piercing salons (as well as construction big box stores, but only at weekends), and banned access to green areas such as parks and forests. Poland was of course not the only country that decided on a lockdown, but the restrictions introduced by the Polish government should be assessed as relatively strict in comparison with other EU countries. According to the Oxford COVID-19 Government Response Tracker scale, in the period from the beginning of April to the end of May, Polish restrictions were rated at 83.3 points (out of a possible 100). This result placed Poland in 10th place in the EU, with the EU average at around 80 points.

The effect of globally introduced restrictions (as well as changes in citizens’ behavior not resulting from state coercion) was the collapse of the economy. Poland experienced its first recession since the transformation (the one in the early 1990s was caused by the bankruptcy of socialism). Although for the first two quarters Polish GDP fell by as much as 9.1%, compared to other countries the slump was small. The EU economy contracted by 14 per cent, and in the countries most affected by the crisis accompanying the pandemic, the decline oscillated around 20 per cent.