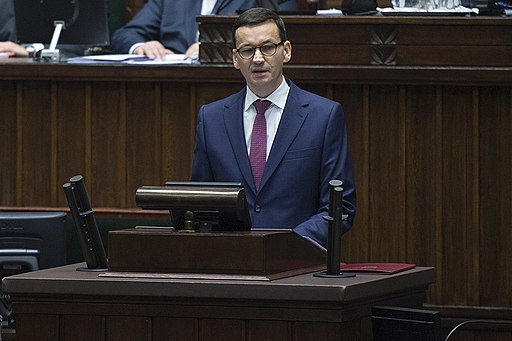 Almost all of yesterday's interview with Mateusz Morawiecki for the Rzeczpospolita daily, entitled "We Want to give Poles  Peace of Mind and a Prosperous Life" was based on statements that insult the intelligence of the average citizen and thoughts on economic policy, which are in vivid contrast to empirical research. This means that either Morawiecki doesn't know what he's talking about or he knows, but in spite of this he decides to speak untruths, which he encapsulates with magical concepts - spells. The three years of the Law and Justice party's rule were presented by him in the highest of superlatives. And every success, even those that are inexistent, as well as the those that does not result from his own actions, turn out to be his own work. And this falsehood requires firm opposition and civic action.

Firstly, Morawiecki claims to have "improved state institutions", which is to be proved by the increase in tax collection. Although he does not present any calculations, data from the International Monetary Fund (February 2019) show that the increase in revenue in the state budget in recent years has been due to an improvement in the global economic situation by about 50%. It is also worth remembering that the same amount of VAT revenue in relation to the Polish GDP, i.e. at the level of 7.8%, already existed in 2011. Morawiecki therefore falsely claims to have merit, resulting to a large extent from an accidental phenomenon, not to mention projects aimed at improving the collection of VAT, which were prepared and implemented already during the rule of the former ruling coalition.

One of the key incomprehensible slogans-spells used by Morawiecki is "reindustrialisation", which allegedly "taking place like never before". This reindustrialisation, whatever it means, is to be a response to the "traps waiting for Poland" presented in the Responsible Development Plan. Although Morawiecki neither explains what he means nor provides any concrete evidence, OECD data show that industrial production increased by about 250% between 1989 and 2015. Therefore what is this slogan supposed to be about? What does Law and Justice want to "reindustrialise"? How does it relate to the key challenges for the Polish economy?

Although Morawiecki boasts that he has increased the share of public spending on research and development, in countries such as Sweden, for example, the total level of spending on research and development is still more than 3 times higher than ours, of which about 70% is spent by the corporate sector, which Morawiecki should remember, in particular, if he wants to pump money through state piers and nationalize more companies.

An additional danger lies in the fact that the Capital Investment Fund is created in a double election year. With nearly PLN 2 billion of funds at its disposal, the government can use them for electoral campaign purposes, directing funds to rescue or create companies in those districts in which the ruling party could most easily increase its ownership of votes.

komunikat-82019wyliczanka-cacanka-morawieckiego.pdf
See also:
ABOUT US
PROJECTS
PUBLICATIONS
SUPPORT US