FOR Communication 15/2017: State companies attack the courts on party order

The Law and Justice Party (PiS) uses companies controlled by the State Treasury to push for changes in the judiciary that are detrimental to economic growth and civil liberties. At the same time, state-owned enterprises save the Polish Mining Group from bankruptcy and the Polish Insurance Company participates in the nationalization of the Pekao bank. The lack of privatization proves to be a threat not only to the economy but also to the freedom of public debate.

Against the backdrop of the OECD countries, the Polish economy is characterized by a very large share of state-controlled companies, including as many as twelve enterprises from the WIG-20 index. This negatively affects the economy and the standard of living in Poland (cf. FOR Analysis 8/2016) and allows politicians to use subordinate companies for party purposes.

In November 2016, Prime Minister Beata Szydło, together with the presidents of 17 government-controlled companies, announced the founding of the Polish National Foundation (PFN). Each of the 17 founding enterprises has a high share of the Treasury (Figure 1). In four of them, the state is the sole shareholder. In seven of them, although the Treasury and its controlled companies have less than 50 percent of the shares, it maintains a dominant position due to the fragmentation of other investors, among other reasons. In total, the companies contributed PLN 97.5 million to the foundation.

Full version of communication aviliable below in Polish. 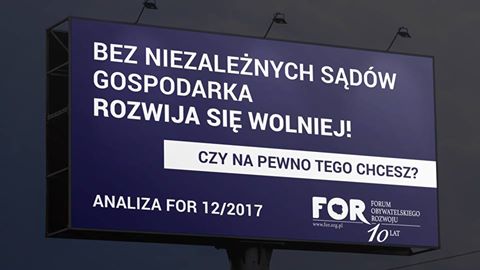 FOR Communication 15/2017: State companies attack the courts on party order (pl)
See also:
ABOUT US
PROJECTS
PUBLICATIONS
SUPPORT US